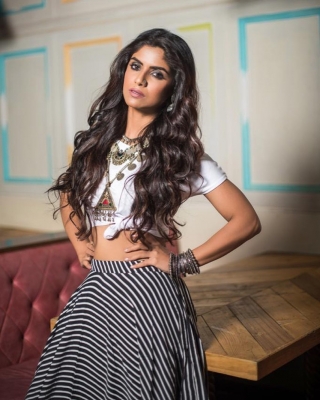 New Delhi (The Hawk): Sayantani Ghosh, a TV actor, discusses her audio debut in "Shraapit" and why, after working in the TV profession for so long, she decided to pursue it. She claims: "I've been working as an artist for around 18 or 19 years. And I'm constantly on the lookout for these fresher problems and fresher subjects so that I'm also emotionally engaged and inspired. I was thrilled when I was contacted and given the chance to be a part of "Shraapit" since, once again, this is a medium I haven't explored: the world of audio. Naturally, I was also a little frightened." The 38-year-old actress continues by stating that audio shows are very relatable since they are similar to the fairy stories that our grandparents used to tell us when we were young.

"Most of us have probably experienced that, when our grandparents would tell us various tales. We are sent to sleep by fantasy-based stories and other things like that. Because I realised that the ability to connect was already established in our upbringing and our cultural way of doing things, that was the thing that most interested me. Then, without giving too much away, this story called "Shraapit" with my character Ghazala appeared "Adds she. The Shah family is said to be cursed in the film "Shraapit." And members of that family are dying. Ghazala, a singer, is responsible for this curse since she cursed the Shah family because she was in love with one of them but was burned alive.

According to Sayantani, IANS: "The medium itself presented many difficulties because I had to use my voice in everything I did. The hardest part was conveying the emotions and the overall vibe without any pictures. I had to learn a lot of things, like how to operate the mike and other things." Sayantani has a lengthy history in the television industry. She appeared in the hit reality series "Bigg Boss 6" and then portrayed Satyavati in the 2013 film "Mahabharat." Additionally, the actress garnered praise for her performance as the antagonist in "Itna Karo Na Mujhe Pyaar." The actor finds it to be incredibly fascinating and utterly different from what she has been doing up until this point as she experiments with a totally new medium.

"I've participated in numerous supernatural stories. But because I lack the visual medium, it's different. This makes it quite challenging. Even as an artist, I can go to the monitor while shooting something to see how my scenarios turned out. But I don't have that where I am. Even if I have to dub for a scene, the foundational research is already done. My fellow actors are all around me, and then everyone adds their ideas. However, in this instance, all that can be seen is me, seated in front of the microphone, picturing the entire plot and what is happening to my character in the performance." The content is important to her, though. "A solid tale and a decent character are what get me excited. And for this reason, I had the idea to create an audio programme. I constantly seek for opportunities to contribute to quality content, and I am receiving them. I started out with television, moved on to audio, and may do web in the future, but I'm most excited by good storytelling "Finally, she says.