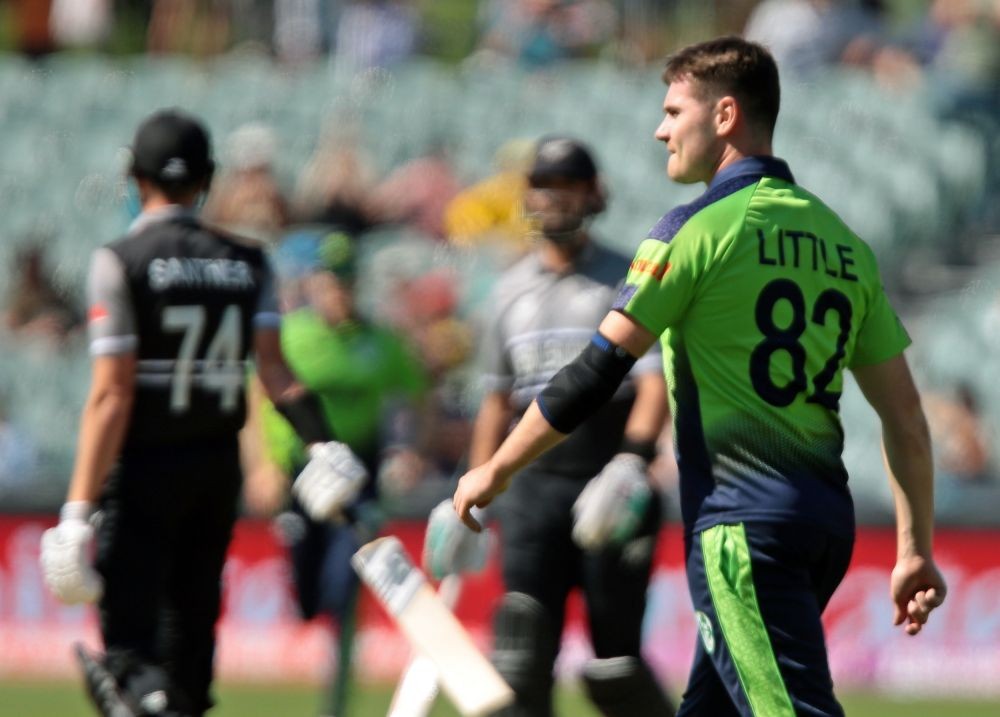 Adelaide (The Hawk): Josh Little, a left-arm pacer for Ireland, attempted a hat-trick, but it was in vain as New Zealand defeated them by 35 runs in their final Super 12s Group 1 encounter on Friday, moving them closer to the Men's T20 World Cup playoffs.

Kane Williamson, the captain of New Zealand, produced beautiful shots all over the field to make a respectable 61 off 35 balls, overcoming his sluggish run to get his maiden fifty of the competition, and aiding his team in reaching a difficult 185/6.

However, Little stole the show by getting rid of him, Jimmy Neesham, and Mitchell Santner in quick succession in the 19th over to secure his second hat-trick of the competition as Ireland only conceded 12 runs in their final two overs.

The incredible hat-trick saw Little finish with 3/22 in his four overs, which is an impressive total. Santner, Ish Sodhi, and Lockie Ferguson shone with the ball, but Ireland could only reach 150/9 in their 20 overs while chasing 186.

With the victory, New Zealand currently has seven points, which means that if Australia and England win their respective final matches, they will have the same number of points as New Zealand. However, the Blackcaps' net run rate, which is now at a robust +2.11, may ensure that they will finish first in Group 1.

As a result of being forced to bat first, New Zealand's aggressive opening pair of Devon Conway and Finn Allen were restrained for the first few minutes of the powerplay. Allen took three fours in the fourth over to eventually get going against Gareth Delany. He next played a four and a six against Mark Adair. In the final over of the powerplay, though, the pacer emerged victorious as Allen hit a straight shot to mid-off.

Conway holed out to long-on off Delany in the 12th over. Williamson and Glenn Phillips, though, quickly rebuilt New Zealand's innings with beautiful boundaries. Williamson continued to bat for the majority of the innings even though Phillips was out after a fast nine-ball 17.

By timing the ball as well as he did and putting runs through holes at will, he appeared to have rediscovered the rhythm that had abandoned him during the tournament. Williamson was poised to push New Zealand past 200 after reaching his fifty with a brilliant flip off Barry McCarthy that went over deep mid-wicket fence.

However, Little's hat-trick in the 19th over allowed Ireland to expertly pull back and hold New Zealand to 185/6. The opening pair for Ireland, skipper Andrew Balbirnie and Paul Stirling, delivered some great boundaries in response to the request for a strong start. After eight overs, Ireland had 68 for no loss and appeared destined to win.

However, spin later worked in New Zealand's favour because to Ish Sodhi's leg-spin and Santner's left-arm spin. Both Santner and Sodhi got three wickets between them from the ninth, tenth, and eleventh overs to break the back of Ireland's batting after realising that pace from the ball was the key to making inroads in Adelaide.

Ireland's financial stability continued to deteriorate as the asking rate rose. As more wickets fell, including three from Lockie Ferguson and one from Tim Southee, Ireland ultimately finished 35 runs short.