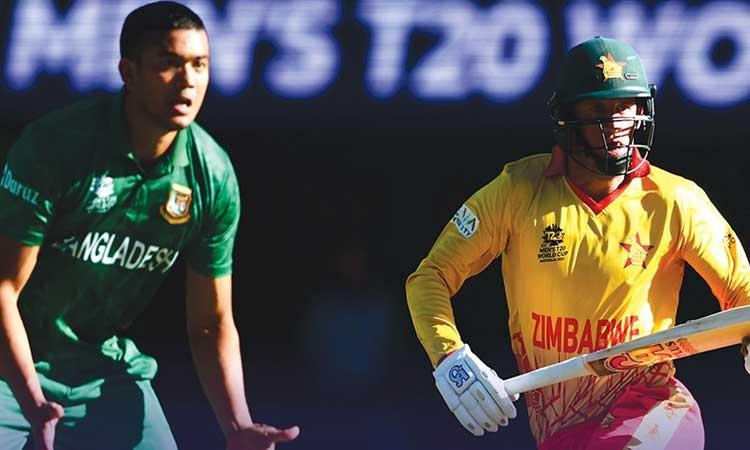 Brisbane: Bangladesh scripted a thrilling three-run win against Zimbabwe — taking the match to the last ball — as they boosted their chances of reaching the last-four stage of the ICC T20 World Cup at the Brisbane Cricket Ground on Sunday.

In a match with a liberal sprinkling of thrills and drama, Bangladesh registered 150/7 in their allotted 20 overs before their bowler restricted the opponents to 147/8 to complete a win by just three runs. It finally came down to the final delivery with Blessing Muzarabani on strike and requiring four runs from the bowling of off-spinner Mosaddek Hossain.

Everyone in the team thought Hossain had taken back-to-back wickets from consecutive deliveries at the death, but Nurul Hasan had incidentally taken the ball in front of the stumps and the players were recalled to the field to replay the final delivery.

Hossain repeated the delivery and Muzarabani’s took a big swipe without the bat making contact to gift Bangladesh a win they probably deserved following a superb new-ball spell from Taskin Ahmed (3/19) and an equally impressive haul of 2/15 from Mustafizur Rahman.

Bangladesh’s Shakib Al Hasan and Zimbabwe’s Sean Williams are two of just four players at the T20 World Cup who also featured in the inaugural tournament in 2007 and the two showed they still have what it takes to perform on the big stage.

Williams (64) had threatened to take the match away from Bangladesh with a brilliant half-century, but Shakib produced a piece of magic in the field to run out his fellow veteran when he had Zimbabwe on the cusp of victory, according to ICC.

Williams had hit three boundaries from five balls to make the equation 19 needed from nine, but the Zimbabwe veteran didn’t count on Shakib throwing down the stumps from close range with a brilliant piece of work. Shakib (0/34) went wicket-less from his four overs, but the Bangladesh skipper rose to the occasion to ensure his side stayed in the hunt for the semifinals.

Earlier, Najmul Hossain Shanto paced Bangladesh with a career-best innings of 71 from just 55 deliveries as the Asian side posted 150/7 in good batting conditions earlier in the day.

The Bangladesh opener enjoyed a 54-run partnership with Shakib (23), while Afif Hossain (29) also boosted the total that was helped by some poor Zimbabwe fielding. Zimbabwe dropped a handful of easy chances and were left to rue the fact they let a few extra runs slip in the field with some sloppy efforts in the outfield.

Muzarabani (2/13) was the pick of the bowlers for Zimbabwe, while fellow quick Richard Ngarava (2/24) registered his own two-wicket haul.

The victory sees Bangladesh jump to second place on the Group 2 standings and they can clinch a berth in the final-four with victories over India and Pakistan. While Zimbabwe’s unbeaten start to the Super 12 stage is now over, they remain in the hunt for a semifinal berth. The African side will need to defeat the Netherlands in Adelaide on Wednesday to stay in contention and then they may come down to their final Super 12 match against India at the MCG.