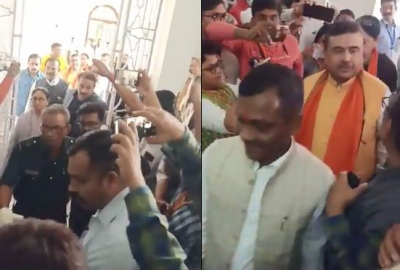 Kolkata (The Hawk): Suvendu Adhikari, the leader of the opposition in the West Bengal Assembly, agreed to a courtesy meeting with Chief Minister Mamata Banerjee on Friday but declined a one-on-one meeting.

Instead, Adhikari and three other BJP lawmakers walked to the Chief Minister's room in the state Assembly.

Adhikari said that by denying the opposition room, the state administration is in violation of the constitution during Friday's question period in the Assembly. Adhikari was informed by the Marshal of the Assembly shortly after the discussion that the Chief Minister wants to meet with him in her room.

Adhikari requested fellow BJP lawmakers Manoj Tigga, Ashoke Lahiri, and Agnimitra Paul to go with him instead of going alone.

Adhikari then revealed to reporters, "If I had met the Chief Minister by myself in her room, it might have sparked several political rumours and discussions. So, as soon as I learned that the Chief Minister wanted to meet with me, I requested the companionship of Manoj Tigga, Ashoke Lahiri, and Agnimitra Paul."

Adhikari did not go into detail about what was said during the brief encounter, though.

It was a straightforward, polite meeting, he claimed.

Additionally, the Chief Minister remained silent on the subject.

Later, Banerjee made the decision to respond to Adhikari's claim that the state government is infringing on constitutional rights by denying the opposition space.

"For the position of chairman in nine of the Assembly's standing committees, offers were made to the opposition party. On the other hand, there isn't a single Trinamool Congress MP serving as chairman of a Parliamentary standing committee. I view the opposition leader as my younger brother. He frequently refers to a "government of, by, and for the people." However, everything now appears to be "of the agency, for the agency, and by the agency," "said Banerjee.