Sardar, starring Karthi, will debut on OTT on November 18 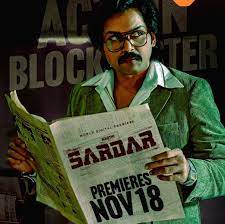 Chennai (The Hawk): On November 18, the super-popular spy thriller "Sardar," directed by P.S. Mithran and starring Karthi, will be made available on streaming services.

The tense, captivating, and fascinating spy drama, which also stars Raashii Khanna, Rajisha Vijayan, Chunky Panday, and Laila in crucial roles, will be released in Tamil and Telugu on the OTT platform Aha.

The protagonist of "Sardar" is Vijay Prakash (Karthi), a publicity-seeking police officer who is plagued by the spectre of being a traitor's son. The inexplicable death of Samira (Laila), an activist fighting against the privatisation of water sources, marks a turning point in Vijay Prakash's life.

When Vijay Prakash seeks to identify the murderers, a complicated network of lies and treachery is revealed. He is aware of how serious the situation is and how it can endanger the whole country. An nasty businessman named Rathore is at the centre of everything (Chunky Panday).

Vijay Prakash understands that his superspy father (also known as Sardar), who is exiled, is the only one who can thwart Rathore's evil schemes.

I knew we were making something special and huge, which was elevated with the audience's warm and tremendous reception. Karthi, who plays a dual role in the movie, said: "Being part of an enigmatic story was the biggest lucrative reason for me to be a part of 'Sardar'. I am excited that now, a whole new base of audiences will view the film in Tamil and Telugu on Aha."