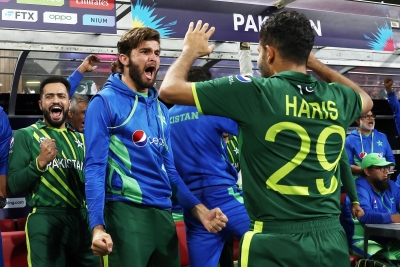 After achieving this victory, Pakistan will face the winner of the second semifinal between India and England on November 13 at the MCG.

After winning the toss and choosing to bat first, New Zealand recovered from early setbacks to register 152-4 in 20 overs thanks to a valiant fifty from Daryl Mitchell and a crucial performance from Kane Williamson. Other key efforts with the bat for New Zealand included Devon Conway (21 off 20) and James Neesham (16 not out off 12), in addition to Mitchell (53 not out off 35) and Kane Williamson (46 off 42).

Mohammad Rizwan and Babar Azam gave Pakistan a strong start by scoring 55/0 in the first six overs, their highest powerplay of the tournament with the bat, while they were attempting to chase down a modest mark.

Devon Conway fired Skipper Babar, and he made New Zealand pay. In the early stages of the innings, he and Mohammad Rizwan expertly handled Trent Boult's and Tim Southee's overs.

While Babar took his time before facing the New Zealand bowlers, Rizwan took the initiative with his aggressive approach and was scoring boundaries. Pakistan continued to hit boundaries at free even after the powerplay, reaching 87/0 after 10 overs.

After that, Babar (53 off 42) picked up the pace and outperformed his opening partner to score fifty. However, he was unable to extend his innings after that because Boult returned to the attack and ended the 105-run opening stand with the wicket of Babar.

Later, Rizwan (57 off 43) too hit a fifty in 36 balls, but like Babar, he was dismissed by Boult in the 17th over because he couldn't bat out the innings. Before being dismissed in the second-to-last over, youngster Mohammad Haris played a crucial knock of 30 off 26 to move Pakistan closer to the victory.

In the end, Pakistan successfully chased down the total in 19.1 overs with seven wickets in hand thanks to Shan Masood (3 not out), who scored the winning runs. The wicket-takers for New Zealand were Mitchell Santner (1/26) and Trent Boult (2/33)

Earlier, in the opening over, New Zealand lost the wicket of Finn Allen (4). Allen smashed Shaheen Afridi for a boundary with the opening ball of the over, but Pakistan quickly made a breakthrough when the left-arm bowler trapped him in front of the wicket with the third delivery.

After Devon Conway and skipper Kane Williamson joined each other in the middle, the Black Caps innings advanced thanks to their efficient strike-rotation and numerous boundary hits.

Conway (21 off 20) was the more aggressive of the two, and after spending enough time in the middle, he appeared ready to take on the Pakistani bowlers. However, Shadab struck the left-handed batsman with a direct shot at the non-end, striker's leaving New Zealand at 38-2 after six overs.

The man who has been leading New Zealand in form, Glenn Phillips, demonstrated his aggressive intent by striking a boundary, but he was unable to extend his innings as spinner Mohammad Nawaz got rid of him on the final ball of his first over.

After eight overs, New Zealand was in trouble at 49/3 and needed a partnership to save them. Williamson and Daryl Mitchell, who hadn't played well in the competition thus far, worked together to save their squad.

After 10 overs, Mitchell and Williamson took some time to get going, and the scoring pace for New Zealand didn't look promising. However, they came together at the drinks break and scored 28 runs off the following 13 balls to boost their confidence. The pair chose their scoring opportunities, pushed the ball into the open spaces, and consistently scored twos to keep the Kiwis' scoreboard ticking. For their fifty-stand, Mitchell smashed leg-spinner Shadab for a six.

In order to lead the recovery and lay the groundwork for a strong finish for the Kiwis, Williamson and Mitchell stitched an important 68-run stand for the fourth wicket. However, Afridi had other ideas. Williamson scooted across to scoop the slower Afridi delivery, but was bowled in the process.

After that, Mitchell kept up his fighting knock and eventually reached fifty. In the final few overs, he and Neesham both made valiant attempts to smash huge blows, but Pakistan's bowlers were well-behaved enough to restrict New Zealand to a chaseable goal of 152-4 in 20 overs on an old pitch.

With his 2/24, Shaheen Afridi was Pakistan's most effective bowler, and Mohammad Nawaz (1/12) was the other wicket-taker.