Over the decision to build universities for Muslim girls, controversy breaks out in K'taka 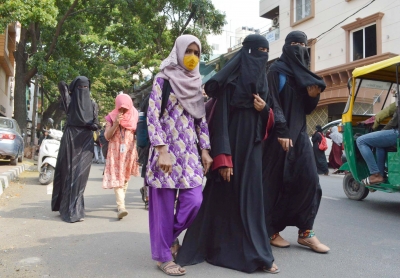 However, sources stated that the government is pressing forward with its choice and has allocated a Rs 2.50 billion grant, adding that Chief Minister Basavaraj Bommai is scheduled to lay the cornerstone for the colleges this month.

The sources further stated that the colleges will initially be constructed in the Malnad and north Karnataka districts before subsequently expanding.

The recommendation for the exclusive institutions was made by the Board, according to Maulana Shafi Saadi, Chairperson of the Karnataka Wakf Board, and the decision was made after a significant number of Muslim females chose to stay at home because wearing a headscarf is not permitted on college grounds.

The suggestion was delivered to Smriti Irani, the Union Minister for Women and Child Development. He added that Kalaburagi MP Umesh Jadhav and Karnataka Minister for Muzrai Shashikala Jolle headed the delegation.

"The idea has received approval from the state government." I am grateful to Minister Shashikala Jolle for taking the initiative to guarantee that Muslim girls receive an education.

But the news has stirred up a commotion in the state.

According to Mohan Gowda, the leader of the Hindu Jana Jagruthi Samithi, if colleges are being built for Muslim girls, then Hindu educational institutions ought to be established as well.

Gowda asserted that the decision is against secularism and constitutional norms and issued a warning that "protests would be launched if the government did not reverse it."

Pramod Muthalik, the founder of the Sri Rama Sena, has said that the state's current administration should not permit the construction of the colleges.

We never imagined the BJP would engage in Muslim appeasement prior to the Assembly elections. This is a polarising norm, and the hijab dilemma is present as the colleges are opening. This will encourage division among the pupils, he said.