Massive fire in the Bhagirath Palace market in old Delhi; no injuries 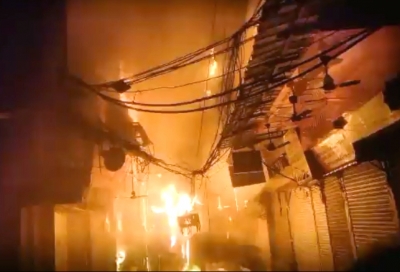 New Delhi (The Hawk): On Thursday night, a large fire broke out in the Bhagirath Palace market in old Delhi. According to sources, 35 fire trucks from the Fire Department are battling the blaze at the wholesale market for electrical items.

A call of a store fire was received at around 9.20 p.m., according to Delhi Fire Service (DFS) Director Atul Garg.

"The shop number 1868, which is close to a gurudwara in Bhagirath Palace Market, caught fire. No casualty has been reported, despite the fact that 35 fire tenders have already been dispatched to the scene, he said.

Around 20 shops were damaged by the fire, which then spread to additional stores. Firefighters are attempting to prevent the fire from spreading any further.

According to a fire official, the neighborhood's tiny streets make it difficult for fire trucks to get to the scene of the event.