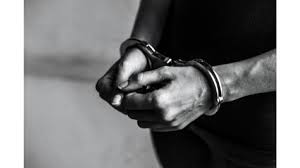 Saharanpur (The Hawk): The fourth son of Mohd Haji Iqbal, a former BSP MLC, was detained by the Uttar Pradesh Police as he checked in for a flight to Dubai at the Indira Gandhi International (IGI) airport.

He carried a Rs 50,000 reward for information that led to his capture.

Suraj Rai, the rural Saharanpur superintendent of police, said: "We were aware of his movements in advance and had informed the airport officials as well. Also present was our team. Our squad apprehended him as soon as he arrived at the airport and started the check-in procedure."

Wajid, 36, is the subject of nearly 20 cases, including one for rape.

Along with his brother and former MLC Mehmood Ali, who was detained in July from Mumbai, Iqbal's three sons are already in jail.

"Wajid confessed to hiding in Ajmer Sharif during the initial interrogation. He was unaware of his father's whereabouts "The SP claimed.

Haji Iqbal is being investigated for allegedly laundering money of Rs 10,000 crore while reportedly operating a mining syndicate in and around Saharanpur.

Additionally, he is being investigated by central investigative organisations such the Income Tax Division, the Enforcement Directorate, and the Serious Fraud Investigation Office (SFIO).

He hasn't been detained yet.