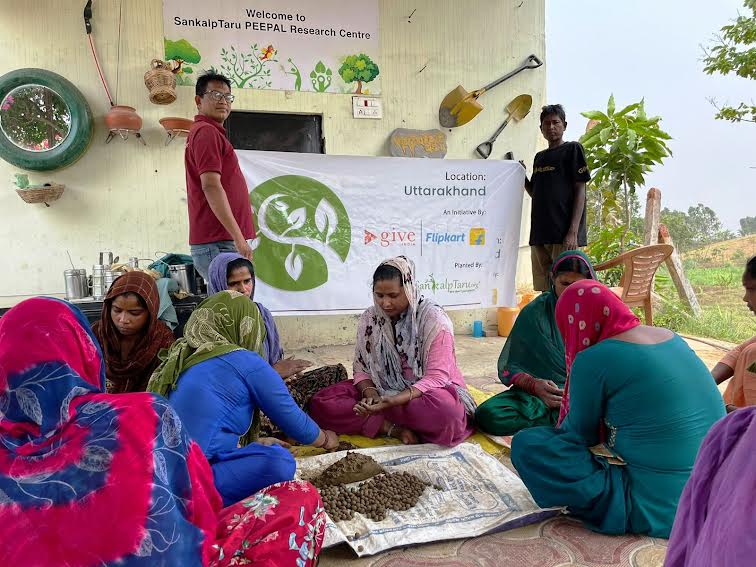 Dehradun (The Hawk): The Flipkart Foundation with its vision of facilitating an inclusive, equitable, empowered and sustainable society in India, collaborated with two NGOs — Give Foundation, and the SankalpTaru Foundation, to spread awareness about the alarming environmental changes in Uttarakhand. As a part of its sustainability initiative, Flipkart’s team developed and introduced a game called the Flipkart Celebration Tree on its app, that involved customers to play the game of growing a tree virtually and for every completed task, Flipkart committed to growing a tree in real life.

Taking forward the commitment, the Flipkart Foundation and the partnering NGOs endeavoured to bring about constructive changes in the ecosystem through Project Seedball bombing in the Chamoli district of the state. Over 1.1 million seed balls were distributed to the school children and community members [directly as well as through govt officials] while educating them on its importance and seeking their support in dispersion of these balls. In addition, drones were used to reach the difficult terrains. About 70 kgs of seed balls were also given to government officials for dispersing through community involvement.

Considering that tree plantation is an extremely challenging task in a hilly terrain such as Chamoli, seed ball bombing has served as a great substitute, helping more than 27,000 people in 63 villages of the district. Around 3-4 lakh trees are expected to grow in the coming years in the areas covered under the project through bombing of seeds of Amla, Padam, Kachnar, Anaar among other native species. The activity has also led to the employment of women in the Chamoli district, who were trained to make seed balls.

Speaking about the initiative, Puja TrisalDirector, Flipkart Foundation,said, “Through the Flipkart Foundation, we have committed to engaging in several critical societal concerns, which also include environmental responsibility and disaster relief. Our collaboration with able and highly invested organizations, such as Give Foundation and SankalpTaru Foundation, has enabled us in improving the lives of thousands of people who have suffered the ramifications of climate catastrophe in Uttarakhand. Project Seedball bombing is a revolution, and a pathbreaking substitute for tree plantation in hilly terrains such as those of Chamoli in Uttarakhand, with its vision to reduce landslides, soil erosion and forest fires. The engagement of women, school children, government officials and the village community has further boosted the efforts of creating green ambassadors on the ground. It has been extremely gratifying to witness how the project has shaped out in the state.”

Speaking of the project, Apurva Bhandari, Founder- SankalpTaru Foundation, said, “We are thankful to Give Foundation and the Flipkart Foundation for looking into Uttarakhand and extending the support for increasing the green cover. With increasing development, the greenery in the region is declining, which is leading to frequent landslides. Tree plantation in such an area is an impossible job, so seed bombing provides a good substitute for it. With a survival rate of 30%, we hope to see around 3 lakh trees in the coming years in the areas where this activity has taken place.”

The seed bombing project will help restore greenery of the barren region and aid in restoring flora, which is critical for binding the soil to reduce soil erosion and stopping landslides for years to come. The trees will aid in lowering the risk of forest fire as native species are planted. Non-Timber Forest Produce (NTFP) will be provided to the neighborhood in order to assist the beneficiaries.