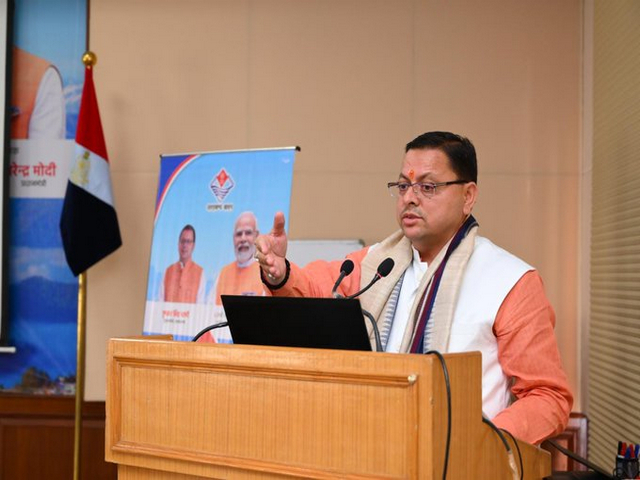 Today is the last day of the three-day Shakshakt Uttarakhand @ 25 Chintan Shivir being held at Lal Bahadur Shastri National Academy of Administration in Mussoorie.

Participating in the 'chintan shivir', the CM said the decisions taken in 'chintan shivar' would be given practical shape. They will be brought in the cabinet for approval after discussion, he added.

Earlier, the chief secretary SS Sandhu informed the CM that discussions would be held with two-three departments every month on the pattern of 'chintan shivir'.

Officers including Uttarakhand Chief Secretary SS Sandhu participated in the yoga exercises. A yoga camp was organised at the Academy's Kalindi Ground and on this occasion, various asanas of yoga were performed.

The CM also went on a morning walk in the Academy campus. He talked to the ITBP jawans deputed for his security on this occasion. He also met other people and exchanged wishes.

The three-day Chintan Shivir began on Tuesday to prepare a roadmap of the state as it inches closer to its 25 years of formation.

Uttarakhand was founded on November 9, 2020, after it was carved out from northern Uttar Pradesh.

Discussion was held on the topics of agriculture-horticulture, tourism, forests during the shivir.

Earlier addressing the 'chintan shivir' on Tuesday, the Chief Minister said, "We people have given the mantra of simplification. We should think that how many departments have adopted this mantra. This shivir should not remain a mere formality."

Dhami further went on to say "We should change the culture of doing work from 10 to 5.

Chief Secretary Dr SS Sandhu advised bureaucrats to get out of the syndrome of saying 'no' to work or take voluntary retirement. He said that in the government system, we do not get paid for saying 'no'.

His advice came in the wake of CM Dhami's recent instructions for improving officials' work in the state.

Issuing instructions, Dhami stated, "To improve the work of officers in Uttarakhand, the government is going to change the standard of ACR (Annual Confidential Report)."

The Chief Secretary said in the "chintan shivir" that sometimes officers are afraid of taking decisions and are more interested in saying 'no' than 'yes'.

While giving the advice, the Chief Secretary asked the officers to read the mandates in this regard. —ANI