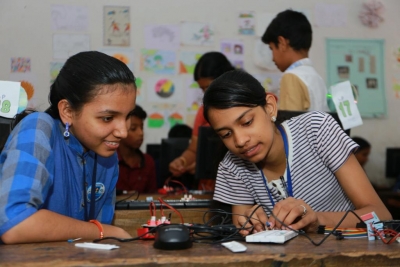 Thiruvananthapuram (The Hawk): For the first time in India, 1.2 million students will benefit from robotics laboratories that will be installed in 2000 high schools by Kerala Infrastructure & Technology for Education (KITE), the state government's Edtech division, starting in December 2022.

The Chief Minister of Kerala, Pinarayi Vijayan, will inaugurate 9000 robotic labs through Little KITEs, the largest student-run ICT network in India, on December 8 in this location, according to V. Sivankutty, Minister for General Education, who made the announcement on Saturday.

"Under the Little KITES programme, which gives pupils in public schools the chance to receive practical training in cutting-edge technology fields like robotics, IoT, and artificial intelligence, robotics is a significant training component. Additionally, the programming instruction provided as part of this would aid students in developing their capacity for original thought and problem-solving, which would aid them in studying all subjects "the student body president turned minister continued.

Using the money allocated for Little KITEs units, "KITE will provide extra support to schools to get additional spares, if required, from the local market," stated Sadath.

4000 KITE Masters would also receive training utilising a specific training module on how to operate this equipment in schools in addition to the deployment of Robotic Kits in schools.

60,000 students are receiving direct instruction from KITE through the use of these KITE Masters. Through this project, over 12 lakh kids would directly benefit from the training of the Little KITES members who would then instruct additional students.

Additionally, students will receive training in a variety of tasks, such as the creation of traffic signals, automatic street lights that are activated by light detection, electronic diodes, automatic doors, and security alarms.

Additionally, as part of this degree, students receive training in the production of mobile apps utilising the renowned Massachusetts Institute of Technology's (MIT) App Inventor and the design of computer games using Scratch.